skip to main | skip to sidebar

You make music, too?

Many moons ago, in Eugene, Oregon, I started tinkering with my ex's turntable and a little hand me down program called "Fruity Loops". My ex, at the time, had literally gone loopy mental. Long story.
Anyhow, to pass the time and probably to de-stress from the situation, I started dabbling in making electronic music. I had a few friends that were "DJ's" and they had mentioned to my ex that if he got some tunes together, they'd let him open for them. Well, he was too busy being a little nuts, so I went ahead and threw together some tracks myself. I presented 5 fresh tracks, all made on Fruity Loops with an added touch of samples from records. I completed them all within 48 hours basically. I took them to Jevon and let him have a listen. He acted cool, like most "DJ's" do, and said "Yeah, these are cool, make them a little faster and we'll add you to the next show...."
So I went home and came up with 13 "faster" tracks.
The rest is history... I was hooked on making music, playing shows (even if they were a bit rough) and entertaining people.
There is, of course, more to this story. But in the last 6, 7 ???? years I've made about 200 songs and with them I have relocated, changed, grown, etc.
That doesn't seem like much, but it really is. I've played a handful of great shows, been asked to play across the country, and my music has had a pretty good UK presence. I've been played in clubs and remixed by peers. I haven't struck gold, my two year battle with West Nile pretty much kicked my butt out of anything creative. I am also on computer no 3, and that has caused a little chaos with with retrieving older programs and songs. They are now embedded in history by way of other people's memory. But I did it and pretty much everything I had was hand me down. Ghetto awesome! I didn't read the manuals (who has the time or attention for that, not me!) I basically tinkered and learned all I know today by way of curiosity.

Anyhow, today I got a nice message from a random guy in the UK. He heard my music on Last.fm and added it to his library. He fancied the song "Hypnotique". I am always completely caught off guard when I get a compliment. Music hasn't been a priority in so long, sometimes I wonder if I even know how to make it anymore, as dramatic as that sounds. I thought I would share my music links with you peeps, viewers, random blog readers, friends, creatives, and fellow electronic music lovers... Everything is FREE to download and I hope you'll find something you like, or even , LOVE!
All I know is I have made the hippies, the punks, the post punks, the squares, the nerds and geeks, the techno folk, the hula hoopers and the break dancers, the humans and the aliens all shake their money makers. That's the best part about it. 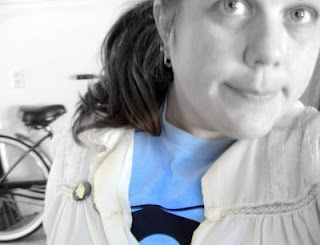